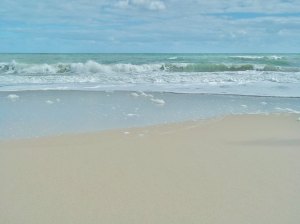 A wonderful benefit of blogging under the WordPress umbrella is that you get to read the efforts of some very talented writers.  When a case of writer’s block comes my way, lately an unfortunate weekly occurrence, I am heartened when I can read something by someone else that inspires me.  Or it makes me a terrible, plagiarizing copycat — I’m not sure which.

Today I am impressed by a very moving post from one such talented blogger.  She offers a continuing narrative from an earlier effort of hers about the lingering feelings still resonating since the death of her mother.  Her words strike a chord for me because I too find myself having unresolved sentiments about my own.  My sisters would probably say those sentiments are actually  issues.  “Issues” is one of those over-used words bandied about by people when they want to make snap psychological judgments.  I should know– I’ve used it myself in the same vein for years.  But phooey on them, I say. Siblings are probably your hardest audience anyway.

My mother died about five years ago, and my dad seven.  The two deaths couldn’t have been more different.  Dad died in the way we all hope for ourselves: peacefully and in his sleep. He was 89 years old.  Mom on the other hand, hung on seemingly forever.  She had an incredibly slow physical and mental decline, taxing all of her children emotionally and financially.  She was 92.

I had always been closer to my mother as a child.  My dad had a very difficult upbringing with a mother who never really showed him much love, saving it instead for his younger brother.  That Dad never held it against my uncle showed great clarity and compassion on his part for understanding the dynamic.  But sadly, there had been a certain amount of emotional damage inflicted on him by my grandmother.  He wasn’t able to truly express his love and affection to his children.  The love was there, but it was hidden under an incredibly dry sense of humor and an unfortunate bad temper.  My siblings and I all endured his occasional bursts of anger and verbal bombasts that were accompanied by a testosterone-driven display of facial expressions, name-calling, and the occasional item thrown to the ground.  He thankfully never resorted to physical abuse, but you were never confident of that at the time.

Because we were never exactly sure of my father’s moods, it was easier to be closer to Mom.  She’s the one who doled out the praise for good work or accomplishments, offered the physical comforts of a hug or kiss, and looked out for our well beings much more closely than my dad.  If you had a problem, you went to her first.  When I eventually went to college and then moved to a different state after graduation, my phone conversations were primarily with her only.

Visits home when I was in my twenties and thirties became challenging.  With my parents now retired, they were spending more and more time together with very little individual outlets or interests.  For some reason, my mother stopped driving altogether and Dad took her everywhere.  When my dad and I would go out together on these visits, he would let loose a long litany of complaints about Mom — how impossible she could be, her contrariness, her questioning of his knowledge or abilities, etc.  He seemed to store up all of his complaints about her for my visits home, which I tried to do about four times a year.

I tried to counsel him.  I suggested that he offer more patience, look the other way, etc.     But he really wasn’t interested in listening to me.  He wanted to talk.  He wanted someone to whom he could unload all of the aggravation he had about my mother.  He chose me because I was safe — he knew I wouldn’t share with her anything he told me.

When Dad died, my mother suddenly regressed into this infantile, spoiled brat child.  Very little made her happy.  Where she was once the kind, loving, and supporting parent, she was now surly and demanding with only the occasional good moment.   My oldest sister became her primary caretaker, and she reported back to us the gory details of all the emotional and physical transgressions that she was witnessing and experiencing.  Thanks for sharing, Sis!

I was put in charge of the finances, and one of the first things that had to be done was to move my mother into a less expensive place because she was quickly running out of money.  My efforts were greeted by her as if I was Snidely Whiplash himself.  I quickly became the devil incarnate for my efforts at austerity.

It soon became apparent at least to me that we were all witnessing exactly what my dad had experienced on a daily basis for many years running.  While my sisters pointed to the increasing onset of dementia, I couldn’t stop reflecting on all of the covering up we all did for many years about my mother’s deficiencies.  My dad was much more than simply a caricature of Morgan Freeman driving Miss Daisy.  He was supporting Mom emotionally, and certainly helping her though the daily rituals of tackling life’s daily struggles.  To his credit, he gave away very little about the true extent of her full personality in those years.

In due course, my mother eventually ran out of money.  When my oldest sister had to undergo surgery for breast cancer, we all thought it would be better to move Mom out to California where another sister had found a wonderful assisted living facility for her.   All of us siblings had to pony up on a monthly basis to keep her there, plus help out with the many healthcare costs.  It was a strain on all of us.  I visited once a month, trying to give my sister at least the occasional weekend break.  Some visits were nice, many were awful.

Eventually her health began to decline, but it was one of those very slow, painful periods where she would get very bad and then somehow rally.  She went in and out of hospice care at least three times.  There was a bit of gallows humor amongst all of us reminiscent of the old Saturday Night Live news gag, “Francisco Franco is still dead!”

It is Jewish tradition that a year after a death the gravestone is finally placed on a grave. Because Mom was buried in California but half the family still lived in Michigan, we had to carefully negotiate the date of the gravestone unveiling.  As the appointed date was about to arrive, a large Pacific storm took hold of a good portion of the state making travel difficult for even me who lived five hours to the north.   We had to postpone the event for a few weeks later.  I made a joke that Mom was continuing to bedevil us all even from the grave.  One of my sisters objected.  The time for gallows humor had apparently passed.

But it hadn’t passed for me.  My joke was surface only.  I had not yet come to terms about how I felt about her, how she treated my dad for so many years, and how difficult she made our lives as we all sacrificed so greatly on her behalf.   My sisters made the transition fairly easily — they were back to good thoughts about her in relative short order. I, however, continued to struggle.

The blogger’s post about her own mother resonates deeply for me.  I do think often of my mom’s many good qualities on a regular basis, and I also reflect on how she too sacrificed on the behalf of all of her children.  I am not a parent, but I do understand that being one is probably the hardest and most thankless job in the world.  You only have one shot at it, and no doubt mistakes are bound to be made.  My mother tried her best given the limitations that she had.  In the end, I can’t really ask for much more than that.

My post-divorce therapist liked to say “it’s all a process” about so many of the transitions I was making, Mom’s death being one of them.  Those words keep coming back to me.  I haven’t yet come to any great conclusions about my mother, but ultimately I know that I loved her and that I need to look beyond all that still bothers me about her.  In spite of my dad’s frustrations, I know this is what he did.

It’s all a process.