With a few exceptions, the musical groups I enjoy now are the same as when I was younger. They’re like a few old, comfortable flannel shirts still hanging in the closet. I can’t imagine tossing them, and it’s not even like I wear them very often. I just want the comfort of knowing they’re still in there. These groups give me a similar sense of comfort. And, I suppose in some small measure, I’m being loyal to the artists too.

Okay, that and maybe there’s at least a tiny level of personal snark going on for me also. I look at some of those ripe, old fellas now and immediately realize that one of us is holding up better. I’m just too modest here to say who.

About a week ago we went to our first concert in a really long time. I enjoyed it! And perhaps because I now look at the world through a blogger’s eyes (everything is fodder), it was interesting to notice how concerts have changed from earlier years. Specifically the audience. But more on that in a moment.

I once mused here how when I was in my early twenties, going to concerts was the highest of all my priorities in life. Things like paying an electric bill or buying food took a back seat to announcements of tickets going on sale for a favorite artist. The fact that this period also coincided with countless evenings of doing laundry, watching basic cable on a black-and-white TV, and clinging to pathetic hopes that phone messages might be returned from young ladies is immaterial. I lived for that next concert.

After that period, life got in the way. Career, marriage, life insurance, mortgage, 401(k), etc., all took precedence. I still saw a show every few years, but attending one was no longer as important as it had been earlier.

On taking early retirement, though, one of my first thoughts was how great it would be to get into a concert groove again. There are so many artists I either missed the first time around or would love to see again, especially those in their twilight years. For instance, as recently as last year I missed an opportunity to see Stephen Stills and Judy Collins on their tour. I hope I can get a second chance on that one.

A friend of mine not only had the same desires as me prior to her own retirement, but she admirably put it all into action. As the months and weeks ticked towards her release date, Sue methodically plotted how she wanted to spend her first full year of freedom. Taking into account where friends and family live in her home state of California, along with studying tour schedules of her favorite musicians and comedians, she spent nearly all of last year attending concerts and visiting with dear ones up and down the Pacific coast.

I hate my friend Sue.

But as much as I’d love to replicate her excellent adventure, I still have too many obligations and projects, not to mention aspirations on other mental bucket lists, to commit to such a pursuit. Still, her undertaking was enviable and noble.

Recently though, Gorgeous and I did go see a performance of Mike + The Mechanics at the nearby Ponte Vedra Concert Hall. I was never really a big fan of this band. In fact I only own one of their albums. But as a die-in-the-wool Genesis fan, there is no way I could miss seeing guitarist Mike Rutherford perform if he’s appearing less than 30 minutes from my home. Genesis is apparently never going to reunite again, so an opportunity to see one of them is pretty is much like putting on a flannel shirt from the closet. 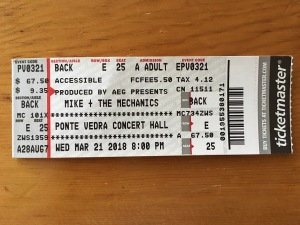 The Mechanics were Rutherford’s pop side project during the eighties and nineties. While I knew I wasn’t going to hear any strain of “Supper’s Ready” or “Home By The Sea,” I figured he might toss some post-prog, Genesis morsels just for me (two were played: “Land of Confusion” and “I Can’t Dance”). It was a good show, and fun to hear radio staples such as ‘Silent Running,’ ‘Living Years,’ and ‘All I Need Is A Miracle’ again. The audience swayed and sang together; some of us were even gauche enough to pull out a phone and use its camera in spite of that fact that we consider such concert behavior déclassé.

Concert experiences are different for me now, though. When prior to the show an announcement was made asking for the owner of a BMW to please come to the box office, I laughed and remarked to Gorgeous how I nearly always took public transportation to concerts when I was in my twenties.

While alcohol consumption was commonplace back then (official and unofficial), I can’t recall ever seeing an argument such as the one we witnessed between a husband and wife two rows ahead of us. It appears that when hubby brought back two glasses of Cabernet from the bar, he was soundly rebuked for not bringing her the Syrah she had specifically requested. I sided with her on that one — Cabernet while listening to Top 40 songs? Where does one even begin with such a travesty?

But none of the above compares with the conversation we overheard between five people sitting near us. In my best Dave Barry, I swear I am not making this up. When we initially sat down in our seats and got settled, I struggled in a clumsy way to get my sweater to hang correctly over the back of my chair. Twice it fell, and twice I had to apologize to the woman behind me as I reached back to pick it up. She thankfully laughed along with her husband, and they proceeded to tell me that she was recovering from recent knee replacement surgery. I promised that I would make sure my sweater stayed far away from her knees. They laughed, we laughed, everyone laughed.

Gorgeous and I then proceeded to sit there eavesdropping, as this couple warned every single person who entered their row to walk carefully. Those knees, you know.

What made it hard to keep a straight face, however, was that another couple sitting nearby, and a woman directly next to me, suddenly begin talking to the first couple about… their personal experiences with knee replacements. Knee replacements! This went on for a full 20 minutes until finally the house lights dimmed and the musicians strolled out on stage. In the vernacular of an earlier period in my life, I was peaking too soon.

As the show started to end, we ran out a side exit during the encore. Back in the day this was my patented move to beat the crowd (looking back on it, I have to wonder what great encores I missed). We laughed the entire way home.

Let’s just hope karma will be kind to my own knees someday.

37 thoughts on “Cabernet Sauvignon, BMW’s, and Knee Replacements: Rock On!”