I’ve always enjoyed the many “Thursday Doors” posts from the bloggers I follow, each of whom link to Norm Frampton’s blog, the creator of the #ThursdayDoors posts here on WordPress and Twitter. As I embark on another summer blogging break, I thought it might be fun to try my own hand at a ‘Doors post. The worst that can happen is Norm will have his lawyers send me a cease and desist letter, right?

The good news is that I live in the nation’s oldest city, St. Augustine. There are lots  of old buildings here and therefore opportunities to show beautiful doors. The bad news is that I chose last Saturday to wander around snapping pictures, and this is  when the local temperatures nearly hit 100 degrees.

So much for timing, eh? My energy flagged a bit after, oh, about 30 minutes. I knew immediately that I’m a Thursday Doors lightweight. Nevertheless, onward we go…

Probably the most iconic structure in St. Augustine is the Castillo de San Marcos, the oldest masonry fort in the continental United States. It is a large Spanish stone fortress built to protect and defend Spain’s claims in what was then the New World. It’s a National Monument, and, at over 315 years old, the oldest structure in St. Augustine. I’m betting it has a great and impressive door on it too. But, oh that 100 degrees temperature; I simply didn’t have the stamina to walk over there to snap pictures of it. I promise to do so in a future post. 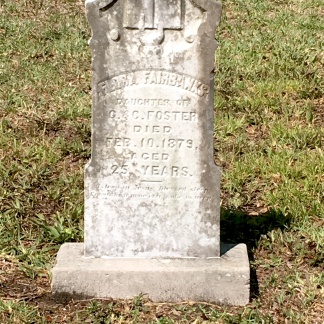 Not a door but another gate: the Huguenot Cemetery is located just outside St. Augustine’s north gate. It was first used for the interment of victims of the 1821 yellow fever epidemic, followed by burial for members of the city’s Protestant population. One only needs to glance at some of the gravestones as you walk by to realize just how long this cemetery has been here.

The Cathedral Basilica of St. Augustine is the seat of the Catholic Bishop for St. Augustine. Masses are popular with tourists and locals alike, and the church offers them each Sunday at 7, 9, 11, and 5pm. The sundial and inscription above the door is Latin penned by the Roman poet, Martial: “The hours pass, and we must account for them.”

Directly across the street from the Basilica, on the opposite side of the Plaza de la Constitucion, is the Trinity Episcopal Parish, established in 1821, soon after Florida became a territory of the United States. It is the oldest Protestant church in Florida. Services began in this building in 1831. Each hour the bells of the church play beautiful songs that can be heard on the Plaza.

Adjacent to both churches on the edge of the Plaza lies Government House, which dates back to 1706. The ground floor of the building is open to the public as Governor’s House Cultural Center and Museum, managed by the University of Florida.

Everywhere you look in St. Augustine there are old buildings with dates, including the downtown shops.

Wade a bit into a neighborhood and you’ll find the Triay-Hall House, an original Minorcan home constructed of coquina stone. It was owned by the Triay family until 1885 and later restored in 1951 by the St. Augustine Historical Society; in 1963 it was acquired by the Hall family. It’s now on the National Register of Historic Places. 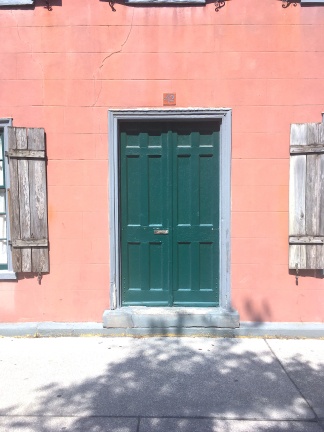 Back in the Old City sits the nation’s oldest wooden school house, which dates back to the 18th century. The house’s exterior was made out of bald cypress and red cedar logs bound together by wood pins and iron spikes, all made by hand. The house has a large chain wrapped around the exterior. This chain was added in 1937 in order to hold the house in place in case of hurricane-force winds and weather. 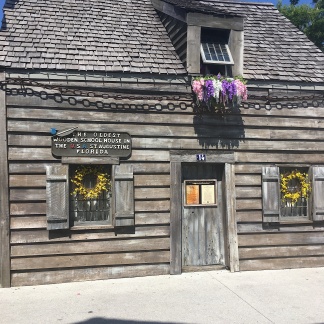 So how do you end a hot day? Take a short drive north on U.S. 1 and have a late lunch at the King’s Head Pub. Authentic? Well, sure, what British pub doesn’t have an old double decker bus sitting outside in its parking lot? 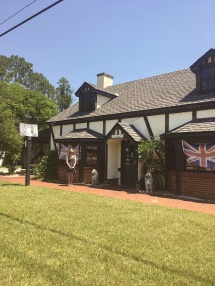 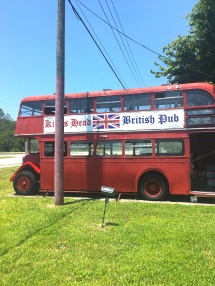 I am taking a summer break from blogging. Have a great summer and see you in September… 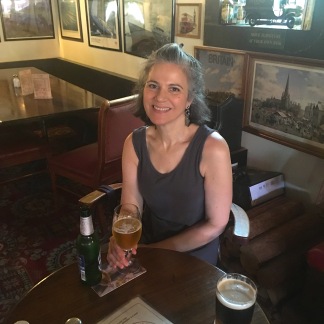