I joined AARP like the majority of Americans do in the year that I turned 50. There were the usual jokes from friends and family about becoming old and gray, and then I mostly forgot about it.

Once a month their magazine arrives in the mail, and that gives me an opportunity to see what famous celebrity has recently crossed over to that next phase of life. Even without the benefit of an airbrush, it’s always nice to see if I’m possibly holding up better than a former matinée idol from the eighties.

A handful of years earlier, I also joined the National Active and Retired Federal Employees Association (NARFE). NARFE’s mission and focus is obviously more narrow than AARP’s, centering on issues germain to employees and retirees of the federal government. NARFE also sends out a monthly magazine (sans celebrities), and up until my retirement I read it with only a passing interest.

I also send each about $25 in additional contributions during the year to their respective legislative and lobbying arms. In a “blogger’s note of full disclosure,” I additionally made a whopping $12 contribution earlier this year to the National Committee to Preserve Social Security and Medicare (NCPSSN).

When money and politics collide, I am the embodiment of everything Messrs. Sanders and Trump have been warning us about in the current campaign season. You better believe I expect favors back for my $112, brother.

When I retired I immediately became more engaged with both AARP and NARFE’s outreach efforts. Instead of hitting delete on their e-mails as I did in the past, I began reading them and considering the helpful information. I also take advantage of their exclusive webinars and online Q&A sessions, which often demystifies the arcane matters of insurance, social security, and money management. Perhaps the most pleasant surprise in retirement is that useful information is constantly out there if you want it.

But not all of the boomer generation brethren are necessarily interested.

Yet, they still hold great influence and clout by the sheer size of their numbers. A June 2016 article in NARFE Magazine titled “Why The Boomers?” explains:

“It is important to recognize that boomers do not join organizations and participate in the same way that previous generations have. But, throughout their adult lives, boomers have benefited from their large numbers and uniformity of interests.”

In spite of their reluctance to follow the path of the previous crowds, boomers have been influential in shaping their own desires into the marketplace. The article lists two examples: Levi’s development of a “relaxed fit” style of jeans, and the auto industry responding to the demand of a minivan for the years in which their children were raised.

When boomers have spoken the economy has always listened.

Associations such as AARP are keenly aware of the challenges in getting this key demographic group to pay attention. With the pretty faces of Denzel Washington, Sally Field, and Brad Pitt gracing the covers of its magazine, they are appealing to the awareness of this most reluctant of groups. In spite of their resistance, boomers are once again being marketed to in an effort to help sustain the lifelines of these entities.

For instance, in the fall of last year AARP, NARFE, and a host of other senior citizen action groups pooled their resources in a successful effort to get government officials to correct a steep rise in Medicare Part B costs. This would have impacted approximately 30% of beneficiaries for 2016. Those affected would have had an increase of 52 percent, from $104.90 to $159.30 per month. The cost increase was due to no COLA being paid to social security recipients this year.

While approximately 70% of eligible seniors are protected by a “hold harmless” provision that shields them from such hikes in the years in which no COLA is paid, the remaining 30% who have no such protection are left vulnerable. Thanks to the collective lobbying efforts by these organizations, a deal was struck last fall between the White House and Congress to help those not held harmless.

Some, however, worry that we might revisit this same scenario in 2017. This is where a membership to an organization like AARP can provide unspoken but very tangible benefits.

My wife and I try to take full advantage of the other, more obvious perks that senior organizations also offer.

Three years ago I opted to cancel my AAA membership and instead signed up for AARP’s Roadside Assistance. Our annual cost for their “Road ‘N Tow” service is $58.00. This is a no-frills service that provides road service only (i.e. no maps and travel itineraries).  We also took advantage of AARP’s car insurance (through Hartford) after we saw savings of over $100 a year compared to our previous plan and others that we had considered.

In the midst of my planning a big upcoming road trip recently, I was surprised by the decent rates that I was able to get using both AARP and NARFE’s benefits. In the past I’ve always found the AARP rate at major hotel chains to be a bit of a joke. However, the sun and moon seemed aligned for me this time, and the rates were actually great deals. Savings were close to $25-30 per night less than what I was seeing on the discount travel sites. This was an eye-opener.

Of the seven hotels we’re staying at on this trip, four of them were booked using the benefits of membership for these two organizations.

And what, say, does any of this have to do with doughnuts, you ask? Well, it seems that yet another perk of AARP is a free doughnut at Dunkin Donuts when you buy a large drink.

Okay, that one I  personally can pass on. Doughnuts are evil.

But hey, statistically speaking, some of you out there eat them.

And I bet you’re more honest about it than I am. 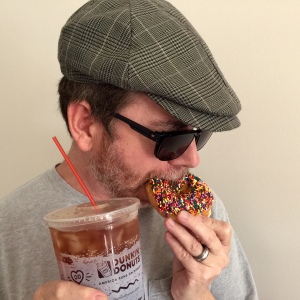 20 thoughts on “All This and Free Doughnuts Too”

Follow Snakes in the Grass on WordPress.com
Join 599 other subscribers