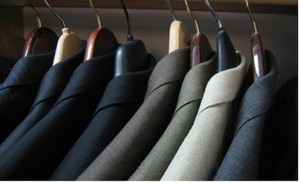 One of the stark realities of retirement for me came in the immediacy of our planning to move, and the not-so subtle suggestion of my wife that I might wish to weed through some of my clothes.  Since our marriage and moving in with me, Gorgeous had to suffer from being given a very small amount of space in our shared bedroom closet space.  I am, or at least was, a clothes horse.

I get my clothes gene honestly because my paternal grandfather was a tailor and suit maker.  My father loved nice suits and sports jackets his whole life, and so it wasn’t too much of a surprise that I followed, well, suit.  When a friend in the 1990’s suggested that I might enjoy seeing a visiting tailor from Thailand, I jumped at the chance.  I began a relationship with him that lasted for over ten years.  On his visits to the United States, he would send out an e-mail ahead of time with details on his latest shirt, suit, and jacket offerings and the dates when he would be arriving in all cities.  I would contact him to make an appointment,  meet him in his hotel room, and he would immediately re-take my measurements.  I would spend time carefully looking over the many fabric swatches he brought for suit, jacket, shirt, and pant offerings.  Because of this man’s wonderful craftsmanship, I had quite a wardrobe of fine tailor-made clothes that I would wear primarily to work but also the occasional social function.

I was quite the dandy.

As my retirement date approached, and we were making our exit plans for Florida, Gorgeous was able to convince me that my need for so many clothes was no longer necessary.  I was left to decide between myself and my conscience just how many of these fine clothes I would keep, and which I would donate.   Portland has quite a few wonderful vintage and used clothing stores.  I had convinced myself that my finely made suits would fetch a very reasonable price.  However, I soon learned from an exceedingly polite clerk at one of these stores, that unless my suits were vintage-quality, such as 1960’s Mad Men or earlier, that they wouldn’t be interested.  My suits were thus destined for the Goodwill store.

I spent a considerable time deciding exactly what to keep and which to donate.  The cold hard reality is that I really only needed two or three suits going forward.  A dark one, a light one, and maybe a neutral one.  Curiously, the most difficult part were the sports coats and blazers.  I had so many nice ones, particularly in tweed.  Although I know it gets cool at night in the winters in Florida, I certainly no longer needed the five or six tweeds that were still hanging in my closet.  Hard choices had to be made.

Shortly before we moved away, I actually visited the Goodwill store where I had donated everything.  I found a few of the suits hanging up with others on a long rack.  I was curious how they had figured a size for them since they were all tailored specifically for me, and I tried hard not to be insulted by the prices that they had arrived at for their new worth.  I also fought at least an urge to buy one of them back.   This was a stupid thing for me to do; I felt all the clothes were looking at me as a traitor or worse.  I bolted out of the store feeling very guilty.

So now I have about three suits and I think five sports coats. I kept the best of the custom shirts, and in fact there are probably a dozen hanging in a dry-cleaning bag that have never been worn.

Gorgeous and I now have separate closets, and mine is especially roomy.  Since we’ve arrived here, I have only worn long pants and button-down shirts twice.  My uniform each day seems to be cargo shorts with either a jersey or t-shirt.

I am no longer a dandy.