What with two out-patient surgeries, plus the discomfort of having to walk around for eight days with a urologic stent implanted in me, your humble blogger and the missus took in some of the holiday festivities of our newly adopted home city.

What’s a little pain when you can stimulate the local economy and get into the holiday spirit, right? Pass the pain meds and let’s boogie.

It’s been 15 years since I last lived in a tourist town. I find it comforting to know that there are all kinds of fun and interesting things just a five or ten minute ride from my home. St. Augustine was settled by the Spanish in 1565, and is the oldest continuously occupied European-established settlement within the borders of the continental United States.

We live close enough to the Historic District to get there easily for meals or late afternoon strolling, but far enough away to not ever be too terribly impacted by tourist traffic. In spite of my moving a bit slow for a few days earlier this month, we took in the sights and got into the spirit of the season.

There are shops and restaurants galore to sample

Warning! Even for locals your wallet will take a hit here

Dinner at an Old City Spanish taverna. Unfortunately I used the flash, so it looks like it’s in the middle of the afternoon when in fact it was around 7:00pm and already dark.

The “Nights of Lights” runs from November 18 to January 31, 2018. There are a myriad of ways to see it including trolley and boat. But “Mr. Stent” stubbornly insisted on seeing it all on foot. I suggested to Gorgeous that next year we should ride the trolley because it looks like fun. I’m not certain for sure, but I thought I caught her rolling her eyes at that very moment. It’s hard to be certain in the dark, though.

Nevertheless, the sights were beautiful!

The Lightner Museum is featuring the “Dressing Downton” exhibit till January 7, 2018. A wonderful smattering of outfits representing the show’s upstairs and downstairs characters are displayed. A speaker system overhead quietly plays the very recognizable theme music heard on each episode, which to no one’s surprise is also available at the exhibit gift shop. Of course, it seemed only right that we bought the CD.

Courtyard of the Lightner Museum 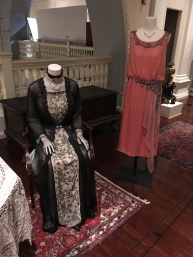 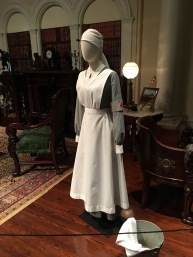 And speaking of that gift shop… we didn’t buy these items, but I did get a grin out of seeing them…

What would December be without a holiday concert? During the early part of the month, we attended a concert put on by the St. Augustine Symphony.

It’s really kind of gauche to take a picture at the symphony, but have you noticed how there’s always that one person who nonetheless does? Dude, you’re not at a Bon Jovi concert. 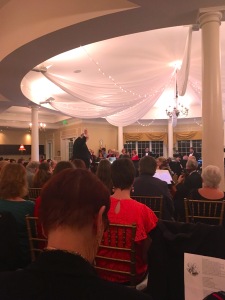 Finally, we were blessed this past week with really beautiful, warm weather. With the students away on break, I took the opportunity to take a short walk around the Flagler College campus. The campus is right in the heart of the Historic District of St. Augustine. If you close one eye and ignore the palm trees, it almost feels like you’re at Hogwarts… 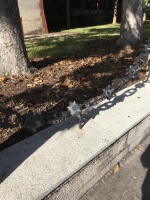 We were very fortunate to be able to get out and enjoy so much during a typically slow time of the year here. We knew something was amiss when parking spots were available on the street right in front of nearly every place we visited. If only I had gotten that tin of Mrs. Patmore’s pudding tea.

19 thoughts on “Holiday Excursions and Diversions: Finding My Inner Grantham”

Follow Snakes in the Grass on WordPress.com
Join 596 other followers