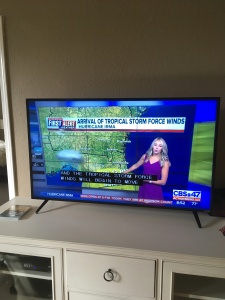 After a day of decision, with periods of indecision tossed in for variety sake, we have decided to “shelter in place” for Hurricane Irma.

As expected, the city of St. Augustine declared a mandatory evacuation late Thursday to be effective today, but our decision today is based on the current, projected path of the storm. Since it will hug the west coast before heading northwards into Georgia and beyond, we decided early this morning to stay home. It just didn’t seem to make any sense to head to the same place where the storm is also heading, and then later sit on clogged highways Tuesday or Wednesday in order to get back home.

In anticipation of this yesterday, we made sure to stock up on additional supplies, and also to prepare our condo for the eventual loss of both power and water service. We are told that the city will turn off the water at 6:00pm this evening.

Our condo association president, an assertive and somewhat irascible type that in calmer moments could possibly grate on unsuspecting nerves, has been nothing short of a beacon of confidence, information and guidance. Among his many suggestions was to go out to Lowe’s and buy a barrel to fill with water. This way we’ll be able to administer our own pressure for the toilets to flush on their own power. He also recommended filling the bathtub too. For someone whose sole knowledge of plumbing is a bathroom plunger, for me this was golden advice.

To paraphrase William Wallace: “They can take away our water, but they’ll never touch our bowels and kidneys!”

As we watch the reports and follow the news as much as possible, there is a satiation process that can take place with the endless drumbeat of advisories, warnings, and scenes of frantic evacuees on clogged highways. We sometimes take pains to mute the TV but still glance at the closed-captioning now and then to keep current. It’s either that or Ativan, and I’d rather save that for tomorrow and Monday.

Unfortunately I’m finding the local Jacksonville stations less than satisfying for coverage of the storm. So until we eventually lose power I’m depending on the great talents of meteorologist Jeff Berardelli at West Palm Beach’s CBS 12 via that station’s web site. Even though Mr. Berardelli and his colleagues are covering the storm with South Florida in mind, I am getting what I need to know from them more efficiently than our local sources here. For those lucky enough to be following all of his from afar, I do recommend their coverage if you wish to take a break from the Weather Channel.

Last night we literally changed the channel and plopped in a DVD to watch an old episode of “Upstairs Downstairs.” For an hour we were able to absorb ourselves into the details of Mr. Hudson, Mrs. Bridges, and the Bellamy family. This morning Gorgeous just looked at me when I asked for bangers and mash for breakfast.

And, of course, there have been a few absurd moments.

Take earlier, for instance, when I ventured to the tiny convenience store outside the gates of our condo community, and I witnessed a woman argue with the proprietor about his reluctance to cash-in her winning $50 winning lottery ticket from last night. Apparently the good store owner was asking her to return after the storm or go to another place to redeem it. I couldn’t figure out where my sympathies lay in that argument. But I did get inspired, and so I decided that I too should to try my luck. Perhaps Irma wants little ‘ol me to be rich?

I bought a scratch ticket for Gorgeous and left it on her keyboard as a surprise. Score! A $2 winner. I rock.

In my previous post, blogger Nina and I exchanged humorous anecdotes about people who stock up on basics before a storm, specifically bread and toilet paper. I laughed as I indeed saw many people with scores of both in their grocery carts. Oh, those daft folk.

So last night guess what I noticed our own home was in perilously short supply of?  Oops. Luckily the convience store had just what I needed…

So we’re holding tight, braving the elements, weathering the storm, or any other expression that might also work for you buzzword bingo enthusiasts.

I’ll fully admit this is a most anxious experience. We have lots of neighbors surrounding us who have made the same decision to also hunker down (“bingo!“), and it is good to know that there are others around us. Our below neighbors specifically, John and Karen, are old hands at this having lived in Florida their entire lives. They provide a sense of comfort to our sometimes frayed nerves.

I don’t recommend you come by to visit us for a bit. But when you do, I promise you a working toilet.

Keep us in your thoughts, please.

35 thoughts on “Sheltering in Place for Irma: The Zen of Bodily Functions”