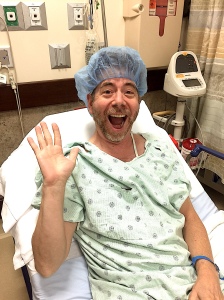 I am recovering now from my recent hernia surgery, and I keep thinking how funny it might be to channel my late mother for this blog post. Mom loved to milk every single medical malady from which she ever suffered. Cousins of mine to this day continue to experience PTSD symptoms from having sat next to her at holiday meals. To her, no detail of her healthcare needed to be private. She happily shared with anyone and everyone; come one, come all.

But thankfully I do realize that although it might be funny to me to do the same, it probably wouldn’t be enjoyable for you, my dear readers. So I’ll spare you all the gory details of the physical experiences I’ve had over the last three or four days.

I’ll also spare you from having to see any more of me wearing that short hospital gown in the above picture (although my photographer wasn’t so fortunate). I now have a glimmer of the challenge celebrity women face when they wear short skirts on talk shows.

The good news is that apparently the operation was a success. The hernia on my right side was successfully repaired according to the surgeon. He even took pride in also repairing a small one in my center which he thought looked like as if it might later morph into a possible problem.

The bad news is that we discovered this surgeon has a bedside manner similar to Attila the Hun.

We met him only once during an initial exam at his office when he confirmed our family physician’s diagnosis of a hernia. We noticed immediately that this guy had a vastly different personality than our doctor.

Our doctor has a staid and courtly manner which can almost put you to sleep because of his tendency for slow and methodical answers to questions. The surgeon by contrast is fast-talking with a tendency of making you feel guilty for deigning to ask any question, let alone breathe the same air in his presence.

I can probably use the combined persona of celebrity actors to capture just who he is: visualize a blend of John Lithgow and John Malkovich, with just a dash of Christopher Walken, and you pretty much have him. Sarcastic and arrogant with enough creepiness to later put you in the fetal position as he makes an appearance during a nighttime anxiety dream.

Gorgeous, to her credit, noticed all of this immediately at our initial appointment with him. But I minimized her warnings, choosing instead to see him as merely eccentric. The lesson here? If you marry a psychic, perhaps you should pay close attention to her observations.

Things got off to a rocky start at the hospital last week when he greeted us in the pre-op area just prior to surgery. Feeling a bit nervous and also full of whimsy, I decided to make a joke at his expense. He asked me to confirm whether it was a left or right hernia that he was repairing. Confident that I was in the company of a fellow traveler of irony and mirth, I bellowed good-naturedly “Well if you’re not sure which side it is, I guess we’re all in trouble, aren’t we?!” I laughed the hearty laugh, which turned out to be not unlike a proverbial one hand clapping.

Gorgeous somehow summoned an absolutely killer double-interpretation of Marcel Marceau mimicking Tammy Wynette: not saying a word yet somehow standing by her man. The surgeon, on the other hand, looked at me and was morphing into Hannibal Lecter by the second.

“I see on average about 30 patients a day,” he said, looking me squarely in the eye. “I can’t keep everyone straight until the day of surgery.” And with that he turned on his heel and left.

I suspect I broke an unspoken rule: don’t piss off your surgeon before an operation.

I remember nothing about the surgery itself except being wheeled into the operating room and greeting all of the staff there as if I were being shown to a table at Joe’s Stone Crab. I later awoke to a nurse in post-recovery who was hell-bent on ignoring my non-verbal cues to stay sleeping. I was groggy and felt sick to my stomach.

I was also apparently impressed by wearing not one but three wrist tags. Gorgeous later told me that I asked her to take a picture of them for this blog. I don’t recall that at all, but it does admittedly sound like me.

We arrived back home in the late morning and I slept till around 4:00pm. The nurse’s instructions were clear about not taking any of the pain meds until I had food in my stomach. But the problem was I really had no appetite, and even trying to eat a small cracker resulted in my wanting to vomit. I was feeling strong pain in the surgical area, but couldn’t seem to hold down the slightest bit of food in order to take the pain meds. It seemed like a catch 22.

Gorgeous later used that very phrase when she called the surgeon’s office for instructions. The poor woman on the other end paused for an extended moment because she knew no matter how it was put to him, Dr. Voldemort wasn’t going to be in any mood to deal with this. In hindsight, I wish we had just used our own mothers’ 1970’s home remedy of Coke syrup, ginger ale, and saltine crackers. But no, the good doctor called back in about ten minutes loaded for bear.

After repeating pretty much what she told his assistant minutes earlier, my surgeon decided to be a prosecutor and go full-on with a cross-examination against my wife.

“I have no idea what you mean by a catch 22. What exactly does that mean?,” he asked.

For the third time, Gorgeous again explained my dilemma: I couldn’t take the pain pills because I also seemed to be suffering from nausea.

His response will forever now be our go-to expression for any illnesses in the future: “Well what do you want me to do?”

Somehow she got him to call in an anti-nausea medication, which I never needed because at some point I actually was able to hold down food. I graduated quickly from crackers to jello and finally to chicken soup. Things were going so swimmingly in the stomach department that I requested nachos later in the evening (it was denied). The pain meds worked well all through that night, and I thankfully switched over to ibuprofen the following day. Since then everything has been fine, though I am still sore.

This coming Thursday I have to return to the surgeon’s office so he can remove the steri strips and sutures. I will go alone, though. One of us is washing her hands of this particular episode.

So all I have to say is be careful when a surgeon is recommended. Bedside manner is certainly not to be underrated, nor is suppressing your own thoughts and concerns aloud.

But do take it from me: keep your jokes and literary references to yourself.