My retirement in the fall of 2014 started on a rather inauspicious note. Our arrival in Florida coincided with Gorgeous suffering what can only be described as a perfect storm of dental drama. Fortunately I had the foresight to continue an optional dental insurance I had been carrying under my former employer’s plan.

When all was said and done, the total cost for three root canals, a bridge, and one implant ended up being somewhere in the neighborhood of $50,000. Fortunately our co-pay after insurance was “only” about $12,000. It was, however, not the start to our Great Adventure that we had anticipated. Instead, for the last year and a half we’ve held the line on expenses and enjoyed life close to home.

For those needing an illustrative example, we exchanged our Bombay Sapphire for Seagram’s, Godiva for Hershey’s, and Napa for whatever Trader Joe promotes on a given day. We also refrained from going away on any overnight trips. We’ve had a permanent staycation for the last 18 months.

But, hey, we live near the beach. As staycations go it’s not exactly like being captive in Duluth.

Now that my annuity is at full payment, we are aiming to bust a few Joe Jackson moves for Steppin’ Out again. A big road trip to Michigan is being planned for June with southern stopovers on the way home after we dispense with the family obligations.

We thought before that happens, though, it might be good idea to shake loose some traveling cobwebs. So we took a two-day venture last week on the Florida Antiques Trail. Gorgeous loves antiques and vintage keepsakes. I love Waffle Houses, tacky souvenir stands, and hotel bars. It’s a match made in heaven. What could possibly go wrong?

Right out of the gate, it seems our GPS was channeling its inner E.T. Its only desire was to go home.

Still not completely familiar with the Florida Turnpike routing, and deep in conversation with Gorgeous as we entered the highway, I followed the soft voice of the Magellan GPS into what I later realized was the wrong direction. Unlike when we drive on city streets, the device never corrected my mistake by instructing to make a u-turn or take me into series of turns until I’m headed the right way again. No, this time it stayed silent and allowed me to drive around the county’s outer perimeter. An hour later, as we approached our town again from the polar opposite direction, we realized then that there was something amiss. ‘Wrong Way’ Corrigan himself I’m sure would have been very impressed.

The jury is still out on what my lovely wife was thinking of her husband’s lack of cartography skills. Note to self: replace your California and Oregon maps in the glove compartment with a Florida one.

By the way, have you ever noticed that when a GPS corrects you, it does so in a voice that suddenly changes to one of mocking disgust and ridicule? It’s like driving with my mother again.

Thankfully, my mistake wasn’t completely a disaster. It did give us an opportunity to see some of nature in all its rugged glory. During that particular stretch of highway, we spotted a flock of vultures sitting together atop a fence that was adjacent to a narrow roadside marsh. We both began commenting on the vultures when all of a sudden a HUGE alligator rose up from the shallow water, twisting and turning ferociously with what appeared to be an egret in its mouth. This violent carnage, all happening in a split second as we drove by, was a shock to our system. It also prompted me to make a note to avoid hitchhiking in these here parts.

Eventually we did correct our direction and made it to our first destination, the little town of Leesburg. Although we were now officially behind the schedule I had devised, I chose instead to see our arrival as perfectly timed for lunch. Leesburg is a quaint little town completely devoid any national chain restaurants. There were lots of wonderful homey cafés at our disposal, and after a short walk down Main Street we found a great place called Bloom’s Baking House and Restaurant.

We chose not to go to God’s cafe, but I hear their devil’s food cake is to die for.

I was also relieved that I chose to leave my gun at home on this particular trip. Imagine the embarrassment! 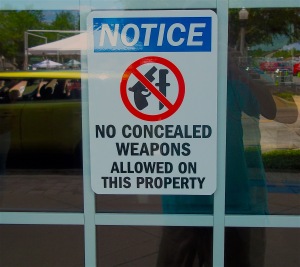 Leesburg’s Main Street takes you right back to what small town America truly still is in many locales across the country.

Because of my directionally-challenged delay on the itinerary, we only hit one antique store in Leesburg (the appropriately named Main Street Antiques). Our next destination was Wildwood, where we had three stores waiting for Gorgeous. The first stop took the longest, the Wildwood Antique Mall.

My parents collected antiques, and I’ve been surprised at how nostalgic it’s been for me to re-experience what it’s like to visit these places again. I recall how as a child I was continually reprimanded for picking up “dirty” things in antique shops. I remember doing a slow burn with them about that. I’m sure I had the urge to let loose a powerful,

“What the hell? It’s an antique store, for God sakes! Oh, sure, and that 40-year-old humidor you’re holding looks completely hygienic.”

I thought such restrictions on my preteen personal browsing were most unfair, especially when it certainly wasn’t my choice to have to go to these shops in the first place. Would it have killed them to allow me the enjoyment of trying on that Davey Crockett coonskin cap that to this day I still remember fancying?

Germs, phooey. My parents somehow missed getting the whimsy chromosome.

Fortunately Gorgeous suffers from no such self-restrictions. When I asked her to pose with the 1920’s flapper hat she was eying, she dutifully obliged. Sadly (or not), she decided against buying it. $70 seemed too pricey. 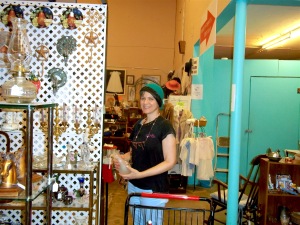 At a certain point antiquing can become somewhat repetitive, though. I mean, really. How much vintage Corningware can a human being really look at in one day?

I soon got my answer.

“Didn’t you just spend about 40 minutes at the other place looking at the very same thing?” 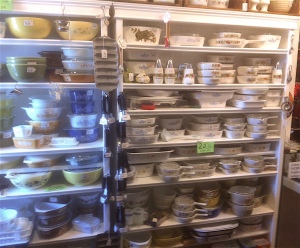 We spent the night in Ocala, where we had two antique shops to visit the next morning before heading back home. As we were getting our suitcases from the car, however, I noticed that one front tire looked a little low. A closer check of it confirmed two big fat nails, both sitting flush against the center tread. It would need to be fixed.

The next morning, fresh from a good night’s sleep and a Waffle House breakfast, we drove to the first antique stop where I happily spotted a tire store across the street. After expertly diagnosing the condition of the tire (“Yep, you got two nails in there, alright”), they said it would be no problem to fix, but that they were busy, and it would unfortunately be about a 90 minute wait. I told him that was absolutely no problem. This man obviously had no idea that 500 feet from his shop sat more Corningware. I’ve got time to spare, brother.

The tire was eventually fixed, and after visiting one more antique shop, we were back on the road home. Our first post-retirement expedition was accomplished. It wasn’t exactly the Grand Canyon or Lake Como, but we did indeed go somewhere.

I can now start preparing for our June junket. Anyone wanna buy a used GPS?

15 thoughts on “A Faulty GPS, Alligator Mayhem, and Nails in a Tire: Steppin’ Out on the Florida Antiques Trail”

Follow Snakes in the Grass on WordPress.com
Join 599 other subscribers