Today your humble blogger is walking a very thin line. I desperately want to employ one of my patented displays of imbecilic foolishness, but instead find myself under a rare case of self-censorship. I’ve even had to change the title of this post four times already to avoid offending.

Not making the cut were “I Spent $30 to View an Old Dress, Believe It or Not!,” “Close Encounters of the Tacky Kind,” and “Good Grief, Norma Jean.” Lame and insipid as they are (always a feature here on Snakes in the Grass), each had to be jettisoned out of an abundance of caution. I’m told Earnest Hemingway struggled with his writing too.

The reason for my hesitancy is all about matrimonial harmony, or specifically a desire to maintain it. Of all the dear readers of this blog, there is no one more so than my lovely wife. She laughs, cries, and shakes her head with nearly every dispatch I upload here, sometimes not even out of pity. Which is why I am treading slowly today; the subject matter is one that is near and dear to her heart: Marilyn Monroe.

Gorgeous loves Marilyn. She has several books about her, and is always on the lookout for more when we visit used bookstores and the public library. She also never fails to buy a magazine if Marilyn graces a cover. The latter isn’t actually difficult to find. I’m convinced that each state code has a business and commerce statute requiring grocery stores to display magazines with her image no less than six times a year in order to maintain an operating license. Most of those magazines find their way into our home.

For a husband, this isn’t such a bad thing. It could instead be books and magazines about cooking and baking, or perhaps ones on healing crystals. Well, in truth those kinds of books and magazines actually are stacked on our coffee table. But when I flop down on the couch, it’s never a Martha Stewart offering that catches my eye.

Marilyn was in a class completely all her own. Decades after her death she still conveys a glamour that is timeless. When I see pictures of other classic movie actresses like Elizabeth Taylor, Grace Kelly, Deborah Kerr, etc., of course I see that they’re beautiful because they were. But their beauty, at least to me, is one that fits the time period in which they were stars. I suppose that’s a polite way of saying that they’re now somewhat dated looking, captured in that 1950’s and 1960’s period of clothing, hair, makeup, etc.

Marilyn, on the other hand, lives on unrestrained by neither era nor fashion. Even in those rare moments when she allowed the camera to catch her in private and unguarded moments, she had such an enduring grace and enchantment about her.

Or perhaps it’s also that she was so vulnerable. We see both the beauty and her frailty.

Because of all these things — her beauty and her weaknesses — my wife has always identified more with the Norma Jean persona rather than the Marilyn one. And although the last thing I’d ever want to do is deride a figure whom she admires so much, a recent Marilyn Monroe encounter that we experienced in our own backyard is ripe for my tendencies to otherwise mock or ridicule. Hence the eggshells on which I am figuratively walking.

It all started about a month ago when we read that the dress worn by Marilyn, on the occasion of President Kennedy’s 45th  birthday party at Madison Square Garden in 1962, would be on display here in St. Augustine at the Ripley’s Believe it or Not Museum. This was the historic occasion on which she famously sang “Happy Birthday, Mr. President” in that often-imitated breathy song-voice of hers. The dress was purchased by Ripley’s in 2016 for 4.8 million dollars, making it the world’s most expensive dress ever.

Gorgeous reacted to this news with something akin to an exulted and ceremonious thrill. Except for a couple of quick gasps, she was speechless for several beats. She then found enough words to announce that we would definitely be going to see it.

For my part I reacted in somewhat of a jaded manner: “Ripley’s Believe it or Not? Seriously?  That’s who owns Marilyn’s dress now?!!!! She has got to be rolling over in her grave knowing that! What’s next for Ripley’s, Martha Stewart’s prison togs?!”

They say that one’s worst audience is usually your spouse. Gorgeous looked over at me, her composure and voice now removed of any traces of the previous state of exaltedness.

Well, it was just a few short months ago that we eagerly saw the wardrobe of the Grantham family for the “Dressing Downton” exhibit at the Lightner Museum. There’s really no need for me to be such a snob about such exhibits, right?

On the appointed day, we arrived at the Ripley museum during the first hour of their opening. St. Augustine’s tourist season is at least six weeks away from ramping up, so we took advantage of a mid-week visit when things are slow in the Historic District. Not only was the parking lot mostly empty, but we indeed ended up having the place nearly all to ourselves. Soon it would be just us, Marilyn, and the tallest man in the world.¹

Hard as I tried to be respectful for the significance of what we were about to experience, it really didn’t help matters that the first museum “employee” one sees upon entrance to the museum is this guy: 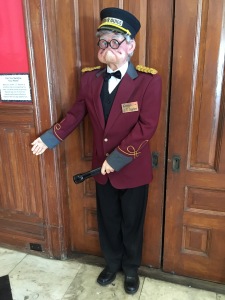 I couldn’t help myself and immediately started riffing on this guy’s wonderful look, that he’s probably an after-hours crossdresser with Marilyn’s dress, and if you look closely doesn’t he kind of resemble an older Arthur Miller? Gorgeous ignored me. As we approached the ticket counter, I asked which of us was paying for the tickets?

“You are,” she muttered quietly. Full Stop.

It took us forever to eventually get to Marilyn. Those Ripley folk are quite diabolical: they expertly place her exhibit in a place where you have to first see their other offerings before you get to the dress. And there also opportunities to spend more of your money too. I’ve never seen so many vending machines in a museum before. 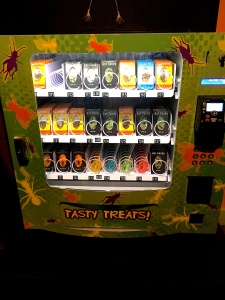 But, oh, the things they have on display here. Those stuffed shirts over at the Lightner really ought to walk the few blocks over this way to pick up tips on museum thrills. Ripley has something for all ages and, um, tastes.

Eventually though, we did finally get to the main attraction. After a few pauses… the moment arrives.

And there is the dress!

The friendly and knowledgeable docent who was placed at the exhibit told us that the display cabinet is encased in a bullet proof glass for security. However, they do allow visitors to walk on all sides of it to be able peer in as close as possible. Since literally no one else was in that room for 20 minutes, Gorgeous had the dress all to herself. She and the docent spoke at length about the dress, Marilyn, her tragic life, etc. By the end of the visit, the two of them exchanged names and email addresses. New friends are made courtesy of Ripley’s five million dollar investment!

Gorgeous was happily beside herself in getting to be close to something so important to Marilyn Monroe and her legacy. Luckily for me, she forgot all about my earlier incorrigible behavior as we were leaving. Life is full of second chances.

My birthday isn’t until next December. If I’m lucky maybe I can have a breathy version of “Happy Birthday” sung to me in a slinky dress. Just to be clear, I’m only writing to one dear reader right now. Believe it or not.

¹ FULL DISCLOSURE: I ended up spending more time looking at the permanent Robert Wadlow exhibit than I did Marilyn’s dress.

28 thoughts on “Degrees of Separation”